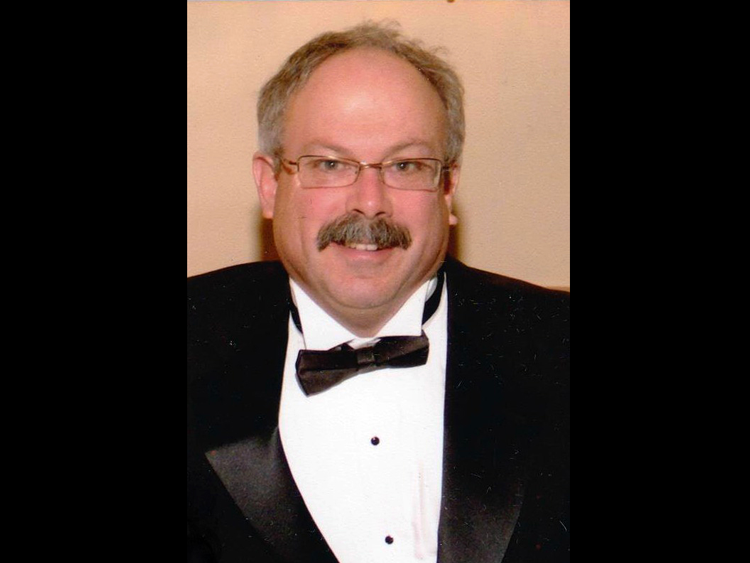 Wyatt Wright was first diagnosed with melanoma on his temple in 2010 and for the next 4 years, as the disease spread to his lungs and ultimately his brain, he went on living his life, the focus of which was taking care of his family, and of his clients, and of the many lawyers whom he mentored and befriended as a partner in his law firm. The following tribute was delivered as part of the eulogy for Wyatt by one of his partners at the Foulston Siefkin law firm, where Wyatt practiced law for almost 32 years.

I could tell you many funny stories about Wyatt in those 32 years, like how as a young associate at one firm social function, where we had a dance band, Wyatt, on a dare, ran half way across the dance floor, then slid the other half on his knees with his arms outstretched in true rock star fashion, ruining a brand new suit by blowing out the knees on his pants.

Or I could tell you about how at client seminars, he would put on a pair of sparkly red antenna to make a point about how a client needed to “get their radar up” to be aware of workplace issues. Or how he would show PowerPoints of his dog Buster so he could make a point about “loyal” employees. Because Wyatt wasn’t afraid to look silly himself if it helped his clients learn something he thought they needed to know. And his clients loved him for it.

Or I could tell you how Wyatt was one of the hardest working and most dedicated attorneys in the firm, a tireless advocate for his clients. How that work ethic drove him, even while he was battling cancer, to be at the office almost every day—not just Monday thru Friday but every day—that he was able to, so that he could keep up with his clients’ needs, right up until March 3, 2014, the day he just could go on no longer. And how everyone in our office remarked about the resolve he showed, how he carried on that battle with grace—grace is the word used over and over again—never a complaint but always a friendly word, often a joke or a compliment to someone else.

No, I’m not going to tell you those stories. Instead, I believe I am here to bear witness to one undeniable fact: Wyatt Wright was a hell of a lawyer. But to have a great legal career requires great sacrifice, and not just the lawyer’s sacrifice, but also the sacrifice of the lawyer’s family. To serve those whom he is bound by his profession to serve, a lawyer must sometimes, oftentimes, dis-serve those whom he loves.

So, to those whom Wyatt loved, and who love him in return–to your wife Pam, and your sons Bryan and Nolan, who sacrificed of their time with Wyatt–from all the rest of us, his colleagues, clients, and friends, we say: Thank you. Thank you for making that sacrifice with Wyatt, and of Wyatt, for our sakes.

Pam, Bryan, and Nolan, your sister Beth, your parents Joan and Morgan, and all of your partners and colleagues, and your clients and your friends, we’re all going to miss you like crazy. We’re wondering how we’re going to go on without you because you were always the go-to guy, the guy in charge, the one to whom we all turned for guidance and advice.

But Wyatt, we will go on because of the solid foundation you built for all of us. You may have been proud to be a partner and a leader in our law firm, but no prouder than we are to have worked with such a great lawyer, a great partner, and more importantly, a good man.