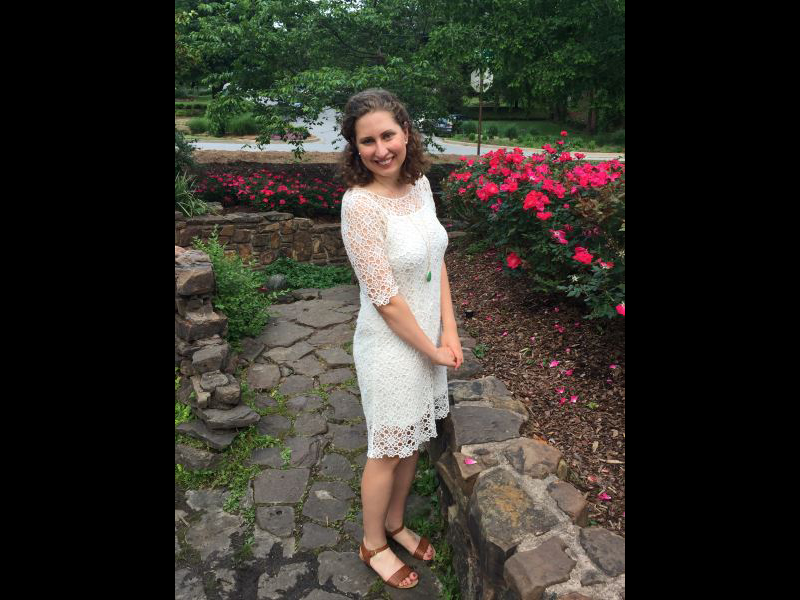 Although Jenny was only with us for 25 years, she showed us how to live with courage, faith, determination and a zest for life. Jenny was born in Littleton, CO and her family later moved to Bedford, TX. When she was three years old, Jenny’s family moved to Leawood, KS where she grew up and attended elementary and middle school at Nativity Parish School. Jenny was a somewhat shy child who loved to read. One of her best memories from middle school was being on the winning team in the Battle of the Books, a quiz bowl type contest with teams competing to answer the most correct questions about books. The wonderful dad who had coached the team took them out for a limousine ride to get ice cream. Another happy memory was playing the role of Mrs. Mayor in the eighth-grade play, Seussical the Musical.

Jenny attended Blue Valley North High School in Overland Park, KS where she competed on the swim team for all four years and went to state competing in the 500 freestyle. During her junior and senior years, Jenny joined the cross-country team and developed a love for distance running that stayed with her for the rest of her life. While Jenny was in high school, her uncle who had cancer of the larynx, came to live with her family. Watching her uncle go through his battle with cancer had a profound influence on Jenny and probably had something to do with her future career choice. Jenny loved her European History class and that sparked her passion for traveling abroad. She also enjoyed AP Biology and Exploring Health Professions.

The University of Arkansas seemed like a perfect fit for Jenny and she was off to Fayetteville for college. She joined Alpha Delta Pi Sorority and made several friends that remained close after graduation. Dad and mom were worried about the competitiveness of a large university and whether Jenny would secure a spot in the nursing program. When she received her letter of acceptance into the nursing program, we were all so proud of her hard work. The summer before her senior year, she had an opportunity to study abroad in England and Scotland and had a great time traveling and learning.

Graduation would come too soon for Jenny and she hated to leave the college life behind. She was so excited to get an interview at KU Medical Center and thrilled when she acquired a position as a nurse on the Cardiac and Family Medicine Progressive Care Unit. Jenny worked nights and stayed at home the first year saving her money. She became even closer to her dad who was retired and loved to fix her breakfast when she came home in the mornings always with stories to tell about her shift.

After a year at home, Jenny moved into an apartment on the Plaza. One of her favorite activities was to go on a run from her apartment to Loose Park. She traveled to Europe visiting England, Germany, Austria, and the Czech Republic this time. Jenny loved her job and had gained so much confidence in her nursing skills. She was on target to begin working toward an advanced degree to become a nurse practitioner. Jenny also wanted to try out travel nursing and had another trip planned to Europe- this time to Iceland, Germany, Italy and Spain.

In the midst of all these future plans, Jenny’s world fell apart. In August of 2017, she found a spot on her scalp that turned out to be melanoma. An initial biopsy indicated that it was a type of mole, but after removing the mole and analyzing it closer, it was discovered to be melanoma. Jenny had another surgery this time to take out a larger area and cover it with a skin graft from her thigh. They found melanoma in a couple of lymph nodes and removed those. Her hair would not grow back over the area where the skin graft was, but fortunately her thick hair would cover it. Following the surgery, Jenny underwent a series of scans and MRIs to check for any additional cancer. Sadly, tumors were discovered in her liver.

On her first appointment with the oncologist, we learned that just a few years ago, there really were not any good options for the treatment of melanoma. With the advent of immunotherapy, there was a treatment option that was having significant success. Jenny began her immunotherapy treatments with determination. In her mind there was no question that she would defeat the cancer.

She sailed through the first immunotherapy treatment, but the second one caused her to be nauseous and for a period of time she could only eat canned pears and broth. It was during this time that Jenny was scheduled to travel to Dallas to be in the wedding of one of her close friends from college. A couple of days before the wedding, it did not seem like Jenny could make it. She was nauseous and unable to eat much solid food. She went to the Cancer Center for fluids and IV nausea medication and amazingly, Jenny woke up the morning of her flight and felt much better. She ended up going to the wedding, had a wonderful time and made it through the weekend with few problems.

At this point in her treatment, the doctors recommended that Jenny stop the immunotherapy and undergo two interventional radiology treatments with radioactive microspheres inserted right on the tumors in her liver. The hope was that the radiation treatments would slow down the aggressive cancer, but we did not realize how relentless the cancer was. Jenny continued on with two more immunotherapy treatments. She handled the third treatment pretty well, but after the fourth treatment, her cancer began to reach the tipping point in her liver and she began to retain fluids gaining about 40 pounds in water weight. Her slender figure was so bloated and she was no longer strong enough to work. Jenny had continued to work through symptoms including nausea, back pain, and swelling until March. She had still continued to run until the end of February.

Her faith grew stronger throughout her cancer ordeal and she was an amazing model of enduring suffering with grace and courage. She often asked us to pray with her. Jenny never really gave up and still hoped to be able to participate in the clinical trial with CAR T. Just a week before she died, five of Jenny’s closest friends from college came to see her and they had a great visit. One of her friends was getting ready to move into an apartment in the Plaza close to Jenny’s place. Jenny was excited and replied that she could ride her bike to over to visit.

We miss Jenny terribly and have been totally overwhelmed at how many lives she touched as witnessed by the people who come up to us and share their thoughts and stories about her. Jenny had a definite impact on so many people and continues to live on in our hearts and sweet memories.